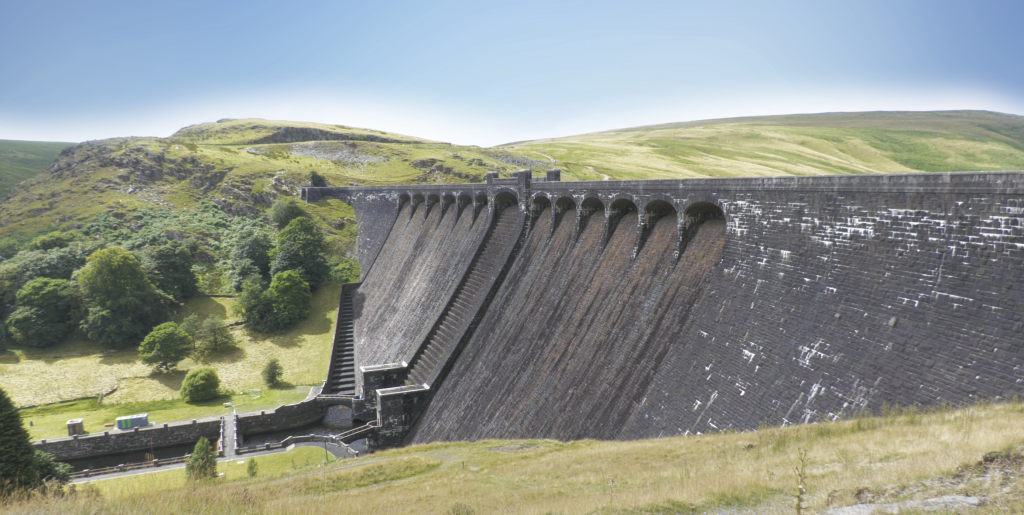 A Local Person would see (and possibly remember!) the site of the Queen’s visit to open the Dam in 1952.

An Architect would see a fantastic feat of engineering. Claerwen Dam, designed by Sir William Halcrow & Partners, has been carefully constructed from concrete, and then faced with dressed stone and blue engineering bricks to help it visually blend in with the other dams. It rises 56m above the bed of the River Claerwen, and it holds more water than all of the other Elan Valley dams put together.

A Stonemason would see the influence of Italian stone masons’ work. When the construction of the Dam began in 1946, most British stonemasons were occupied with rebuilding the House of Commons and other buildings damaged in the Second World War. Masonry work on Claerwen was carried out by 100 stonemasons from Italy instead, who brought their own style with them.

A Folklorist would see the location of “Giant’s Headstones”. Evan and Bill Price were two hill farmer brothers who lived at Nantybeddau, a farm high above the Claerwen River. When the Claerwen Dam was built and the waters began to rise, they knew they had to act to save something very important from being lost below the water forever. They took their horse and cart down and brought back up the Giant’s Headstones – two stones with long forgotten cut-mark messages carved into each one. They knew the local story that they were grave markers for two giants who lived in the Valley and that the language of the cut marks could have been Ogham.